This is a story from more than a decade ago.
Now, Sieglinde is very lady-like next to Ritzhard-kun, but when she used to be a soldier there was a period where she was very rough.

I end shuddering just from recalling those days.

Here I write down the sad recollection of her youth.

I’m going to my family’s place on the weekend. Having come back after saying that, Sieglinde had an amazingly sour face.
It seems like there was a big problem at her family’s place, but it was no mood for me to listen to it with a light mood.
I though about telling her to relax her face to begin with, but when I called her the expression that faced me was terrifying so I could only say, “W-Welcome back.”

I regretted that I should have warned her about her expression the next day.
When I went to the dining hall, I saw Sieglinde in trouble with a soldier four years her senior, Gottfried Hegel.

Apparently, he was pleased with Sieglinde’s impudent expression, attitude and way of speech.
As for her, she judged that he was treating her like a servant and pointed out that such was against regulations.
Gottfried seemed to have had a bad opinion of Sieglinde who was higher-ranked and so he was enraged more than necessary. It felt as though he would hit her at a moment’s notice.
I really need to do something as a friend here, I thought and cut in between them.
With a height just under 190, a body full of muscles, a shaved head and a stern face, Gottfried stared down at me with bloodshot eyes.
I felt like crying, but I told them that fighting would end in disciplinary confinement.
Gottfried then shouted that he won’t have peace of mind then.

I shouted in my head.
Can you forgive with me with a bar of chocolate, I made a crooked smile as I tried to improve the mood.
To end the stalemate, Sieglinde made a suggestion.

——How about putting in a request for a special training session and have a sparring session.

What is this lady suggesting, I turned around slowly while trembling from fear.

Seeing her face, I unconsciously let out a scream.
That face was like a ferocious eagle looking at its prey.
Gottfried, possibly because he was affected too, replied that he accepts in a slightly shrill voice.

After our shift was over, Sieglinde and Gottfried’s ‘special training’ was about to begin.
There were many spectators gathering at the training ground.
It looked like there were many new recruits.
If I recall correctly, they were Sieglinde’s trainees, weren’t they? Maybe they had come to cheer their former instructor on?
Gottfried’s underling’s were overwhelmingly in the minority. His stern-faced friends looked displeased.
It would be an away game, I though, but that wasn’t so. Time to breath out a sigh—— that’s after the training ends safely without injuries.
Sieglinde asked me to be the judge, so I reluctant stood in front of the two.
In the sparring trainings of the army, there are: fighting barehanded, ‘hand-to-hand combat’, fighting with guns with blades attached, ‘bayonet fighting’ and fighting with short blades, ‘knife fighting’, these three kinds.
Sieglinde asked Gottfried to choose. He chose hand-to-hand combat.

Hearing that, I felt relieved.
Since, Sieglinde feels most pride in her barehanded fighting skills.
I’ve seen her knocking down men larger than Gottfried, many times. Thus, I thought that he will be the loser.

As expected, she did a roundhouse kick aimed for a weak point (※Not between the legs) and easily sent Gottfried flying.

With a composed expression, she announced that training was over and exited the grounds.
I quickly followed after her.

I somehow caught up and invited her out for a drink.
Her expression softened compared when I saw her at the dining hall at lunchtime, but there was no reason to leave this dangerous eagle alone. Having thought that there should be a change of mood, I had mustered up my courage.

I thought that it might be turned down but Sieglinde readily accepted.

We decided to meet at the bar after changing clothes.

I couldn’t find Sieglinde immediately.
When I wondered why, the handsome lady was hunted by another lady who was sitting next to her.
She had a long black coat and jammed her hat on so I couldn’t notice her at all.
Noticing me, Sieglinde told the lady that she had company and came over to me.
I was glared at by the lady that was doing the hunting.

——No, we’re not in that kind of relationship!

It was the first time I entered that bar. It’s a classy store, I always thought and did not have courage to go in alone.
I excitedly sat down at the counter.
Sieg asked for a drink that had high alcohol content.
A young bartender asked me about my order and I did not have a menu, so I asked for the same thing she ordered.

What should I do, I’m not a good drinker……

The drinks were prepared.
Sieglinde quickly downed the glass so I drank it down too, but a fiery pain scorched my tongue and throat. What a drink. I felt like complaining.
For the second drink, I requested a sweet drink.
It was a random order, but I was given a lovely pink drink with a cherry floating. That was tasty.

For a while, we drank in silence while munching on side dishes.
In the middle, she spoke up. She told me that she’s sorry for making worry.
It appeared that she had noticed my intentions.
While I was at it, I asked what happened at her family’s place.
I thought that she might not answer but Sieglinde told me a little.
Her story was very simple.
Her family presented to her portraits for marriage interviews, or so.

Sieglinde turned twenty the next winter.
If it were normal young noble ladies, they would have already have married and have children.
So her family’s request is not unreasonable.
However, it wasn’t as though I didn’t understand how she felt.
She served in the army from when she was thirteen and achieved many military feats. It would be a hard story for Sieglinde to get educated as a lady, marry and make a family.
I thought that her mind must be more conflicted more than I could imagine.
Seeing her profile filled with anger, I couldn’t continue questioning her.
Marriage may be the normal, ideal form of happiness. However, it’s not necessary for me now, said she.

Her tone was firm.

In that reply, there was something like a rejection for any help from anyone.

Having been a superb soldier from a long time ago, she had earned envy and undue resentment too. Getting promoted faster than others, she must have been lonely.
Around Sieglinde, there was a tall and thick wall.
I thought that she was like an eagle that she did not let her guard down around anyone.
Even in my long friendship, I had not seen her smile brightly.

Isn’t she a lonely and poor woman?

Unfortunately, I had no clue how to help her.

I dearly hoped that she would find someone that would be a tree that she could rest upon.

More than a decade passed from that day.

The season is early summer.
Thanks to the continued white nights, the village was in a bright mood.
The villagers wait for this season where the sun does not set during winter.
My wife ordered me to take some snacks to the lord’s mansion, so I decided to share some of the fish I caught while I was at it.

When I passed the gate and was walking through the garden, there were shadows of two people under a big tree.

My eyes met with Ritz-kun’s. When I was about to wave in greeting, he put his finger up to his lips.
Looks like he wants me to be quiet.

When I approached gently, Sieglinde was asleep, leaning against Ritzhard-kun’s shoulder.
Recalling the past days, I thought that she was in a defenceless state, sleeping in a relaxed state, trusting her partner.

At that moment, I thought about her lonely days in the army.

Sieglinde found a husband who she could wholeheartedly trust and depend on.

Seeing the two of them, my eyes grew teary and I felt like crying.
To the happy couple, I sent my sincerest congratulations.

It’s rather late, but congratulations on your marriage, Sieglinde.

Translator:
While surfing through the internet, I came across a picture of Emmerich and Aina!
I updated the illustrations page too. 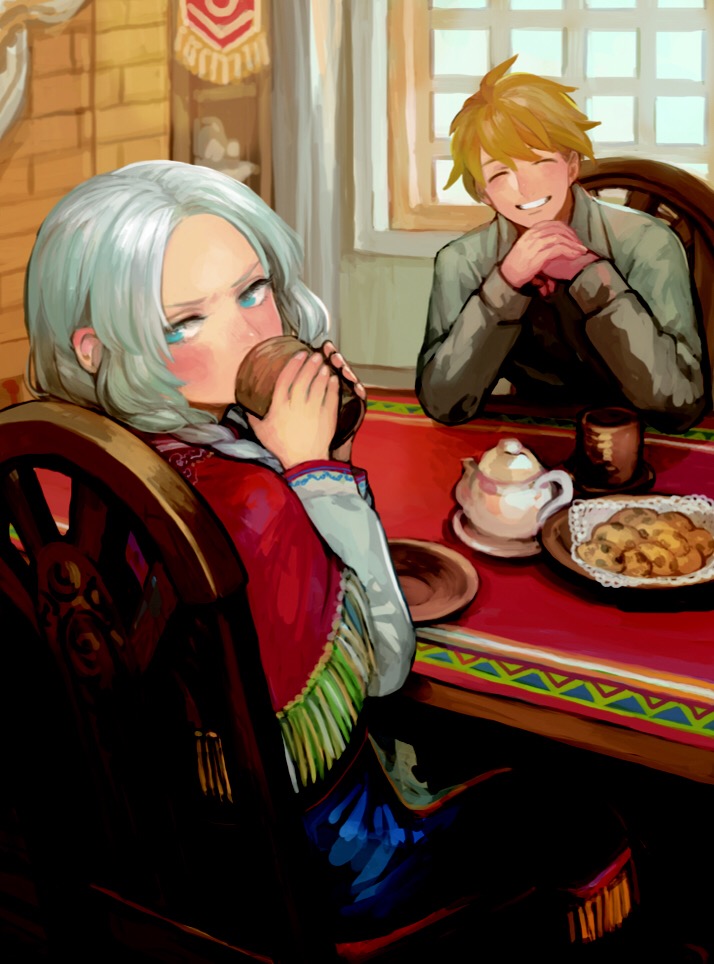